Using freetm.com to translate the user guide for drupal 8

This guide is divided into two parts, one for project managers who prepare the translation memories (TMs)  and adjust its settings, and for translators, who just use the prepared TMs.

For this and any other drupal translation it is very useful to have a TM from Drupal core.
This can be created in two steps. First segment the .po file, that is break the big useless chunks of text consisting of many sentences into smaller chunks (sentences).


After this create a tmx translation memory from the segmented .po file. The default source language is 'en'. As I understand, 2 letter ISO languages can be used with occasional sublanguage (dialect) tags appended:


Setting up the freetm.com environment for translation

You can find the full manual here: https://www.wordfast.net/wiki/Wordfast_Anywhere_Manual
There is also a FAQ

Click File -> TM and Glossary, and on the displaying panel click Upload and upload the Drupal core tmx memory from your local drive. 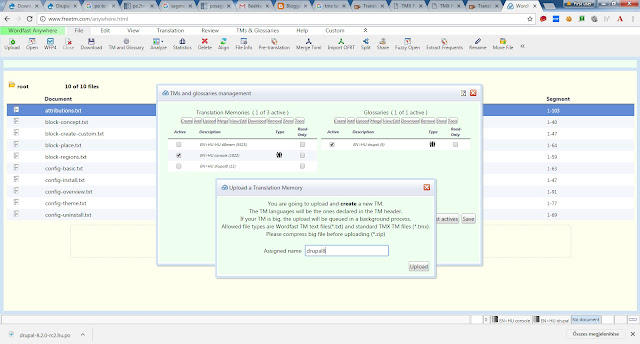 On the same panel click on Create to create a TM to be used for translation. Set the language pair and give it a name, eg. userguide. Optionally create a glossary. I think that is another very useful feature, so just go ahead and create one. In the example I have a general Drupal glossary, and a glossary created specifically for the user guide translation. Here we can add the project specific terms, eg. 'Farmer's market' - 'Termelői piac', which are irrelevant in general Drupal context.
The just uploaded Drupal 8 translation memory will be used only for reference as a read only memory. For this check its read only checkbox. We use the userguide TM to store the translations we create. Make sure its read only checkbox is unchecked. On the screenshots I made these resources active, but as far as I can see, inactive TMs and glossaries can also be shared. Inactive resources are just not used from the current account for translating files uploaded to it. 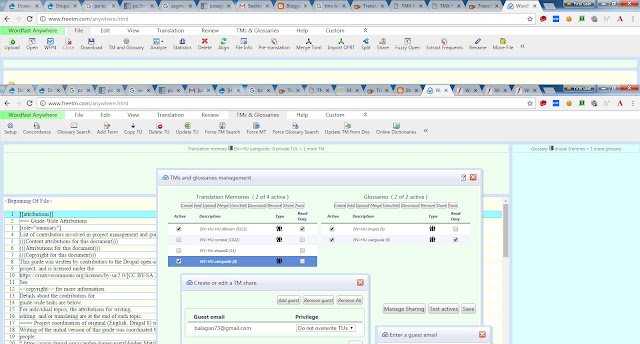 For each active TM and glossary click the Share button, and add the email addresses of the required translators, who already have registered into freetm.com.
That's it for setting up the environment.

In order for freetm.com to properly segment asciidoc files, we had to remove the linebreaks from the Hungarian asciidoc files, otherwise they were incorrectly separated, and they could not be joined using the 'Expand' button. There is now also an issue to remove the 80 char limit requirement. Until it is not fixed in every language, you can try using the Hungarian untranslated source files, where the linebreaks are already removed.


There are two ways to change the TM selection that correspond to two different cases, although the dialog that is opened is the same.
Selecting a file from Document Management List and using "File tab>TM&Glossary button" will only change the configuration for the selected file.
When a file is opened and you use "TMs&Glossaries tab>Setup button" you'll change the configuration of the file and the default selection of TMs that will be used from now on on the new uploaded files.


Now press Start/Next or Alt+Down, start translating and enjoy the suggestions coming from the TMs and glossaries!